I lived in China for a year…

When people ask me this question I tend to answer: why not China?
China is the biggest influencer in Asia and the leading provider for the entire world!

I learned so little about China by growing up in the West. I just knew some stuff. I knew that China had a rich culture that went back thousands and thousands of years —I learned about some ancient Chinese culture in art-history class.

Other than that I just knew that a lot of people lived there (a significant amount of the world’s population) and that over 90% of the stuff that I owned came from China. So I wanted to know more about that. I wanted to learn about China’s culture and its people firsthand.

I was seeking foreign territory, the complete unknown. What’s more foreign than a place that doesn’t use the Roman Alphabet on menus or street signs? Sure, there are other places with strange symbols on their menus and signs but they aren’t as impactful, unknown and foreign as China.

So that’s “why China” —I simply needed to quench a thirst for Eastern knowledge. While also living a new adventure.

And, boy was it an adventure…I’d definitely go back!

Have you ever been to China?

Whether you have or you haven’t I invite you to read about some of my adventures and  discoveries while living in the People’s Republic of China: 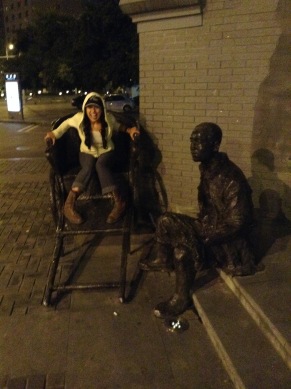 gently down the stream

clutter happens, learn how-to get rid of it

practice getting out of your own way

the Golden Rule for being human

choose more of what fills you